Is Stroke Count Still Valuable in Swimming in 2022?

Coaches and swimmers use Stroke Count because it's easy to track; all you have to know is how to count but is that enough? Let's find out! 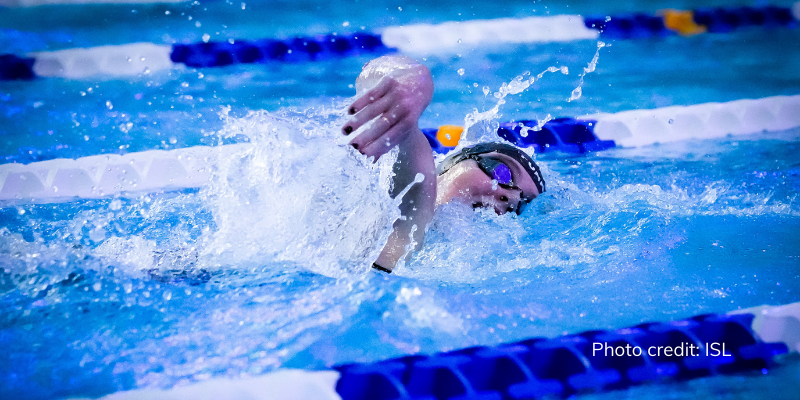 We got the scoop on data!

Coaches widely use Stroke Count worldwide to quantify athlete progress in swimming skills as a means to measure efficiency. It’s believed that the fewer the strokes, the better the efficiency. But is less, really more? The answer here is yes and no. Both overwater and underwater skills can influence Stroke Count, making it hard to understand what is contributing to the change in the number of strokes.

On one hand, stroke-counting is an excellent way for swimmers to increase their Distance Per Stroke and thus stroke efficiency. But on the other hand, taking longer strokes can also lead to extra gliding and a loss of speed. Finally, staying longer underwater can also lead to fewer strokes, making it harder to decipher where the gains were made.

So is Stroke Count still valuable in 2022? Well, we have the data, and the scoop, so let’s find out. And don’t worry, you don’t need to be a data head to follow along.

First, we went to our Data Science team here at TritonWear and asked how well Stroke Count relates to swimming freestyle faster and how it compares to other overwater metrics like Stroke Rate (SR)  and Distance per Stroke (DPS).

Here is how we did it:


What The Data Showed

How do metrics changes (changes in Strokes, Stroke Rate and DPS) relate to changes in speed?

As shown in the graph above, we can see a general trend emerging (shown by the green line) between dropping strokes and increasing speed. The majority of swimmers in our database either increased their number of strokes slightly (1-2) or dropped around two strokes per length. At the same time, these swimmers ranged from a speed gain of just under 0.1 0.08 m/s to a loss of 0.1 m/s. The most significant change in this group is decreasing almost four strokes per length (possibly due to physiological changes).

Lastly, looking at the most improved group of swimmers (dark blue dots), we see speed gains of just below 0.1 m/s up to almost 0.2 m/s - which is a huge gain! For the most part, the swimmers in this group dropped their strokes, with only a very small percent above the zero line.

As per the graph above, the general trend (green line) shows that as DPS increases speed increases too. In more detail, the majority of changes during the year were positive as most swimmers were able to increase their stroke length. This increase in stroke length helped most (but not all) of the most improved athletes swim faster. A very small portion of our most improved athletes either maintained their DPS or slightly decreased it.

As shown in the graph above, the general trend (green line) demonstrates a relationship between increasing SR and increasing speed.  In a closer look, we see that many swimmers, even in the most improved group, lost a few cycles per minute. However, generally, better speed gains were achieved by those who only dropped or added 1-3 cycles/minute through the analyzed period.

How have our most improved swimmers changed their metrics? 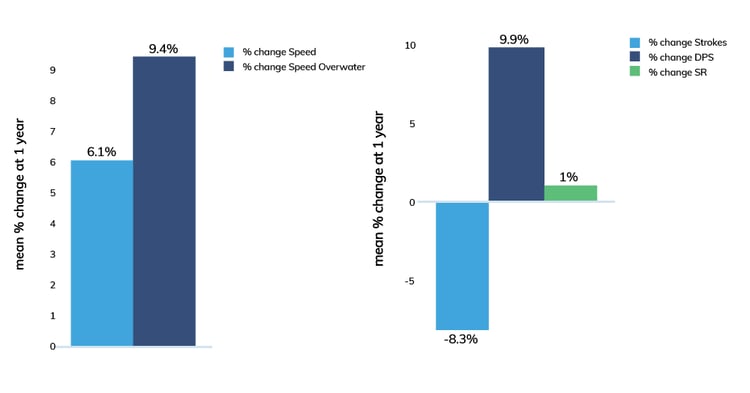 What we see right away is that the most improved swimmers increased their Average Speed by 6.1% and their Speed Overwater by 9.4% by the end of the year period. What caused this increase in speed?

In a closer look at what caused this increase in Speed and Overwater Speed, we found that DPS changed the most, followed by Strokes and SR. In detail, DPS increased by 9.9 %, Strokes decreased by 8.3%, and SR increased by 1 %.

Now that we know the metric combinations that resulted in speed improvements, we focus next on exploring what the individual pathways to speed changes were.

How did 10 swimmers from the most improved athletes get there?

To discover how these athletes got faster, we looked at their metric (skill/technique) progression over time. The sparkline plots below (the ones that look like a heart rate) show how their metric values fluctuated over the 1 year period of this analysis.

What’s important here is how individual each swimmer’s progressions are. Many of the paths to improvement were not steady progressions upwards.

We were also interested in checking if the speed changes the swimmers experienced came in tandem with the metric changes (we can say they were strongly associated) or if they were unrelated and didn’t go hand in hand., For example, each time the speed increased, how likely was it that the swimming metric increased (or decreased). 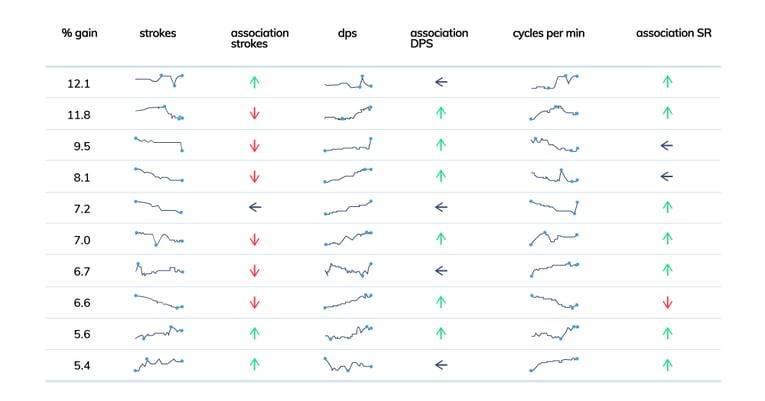 What jumps out immediately is:

This demonstrates that there is no one size fits all solution. What you need to work and improve on will vary individually from swimmer to swimmer, their level, height, and distance events.

To conclude, for the swimmers of this analysis, the metrics most closely related with speed improvement and in decreasing order are: increasing DPS, followed by decreasing Strokes, and increasing SR. Long-term gains were typically achieved by high increases in DPS and slight increases in SR accompanied by a decrease in Stroke Count.

Circling back to our initial question, if Stroke Count is still valuable in 2022. The answer is yes, but it is best to look at it in relation to DPS and Stroke Rate to characterize why the Stroke count changed:

Finally, individually, the 10 swimmers from the most-improved group, each had their own progression of metrics - knowing only Stroke Count doesn’t provide a complete picture of their progress.