The Impact of Stroke Rate & DPS on Freestyle Speed

Since we wanted to analyze how Stroke Rate and DPS influence the total speed, we did a deep dive (pun intended) into the data and crunched a few numbers. 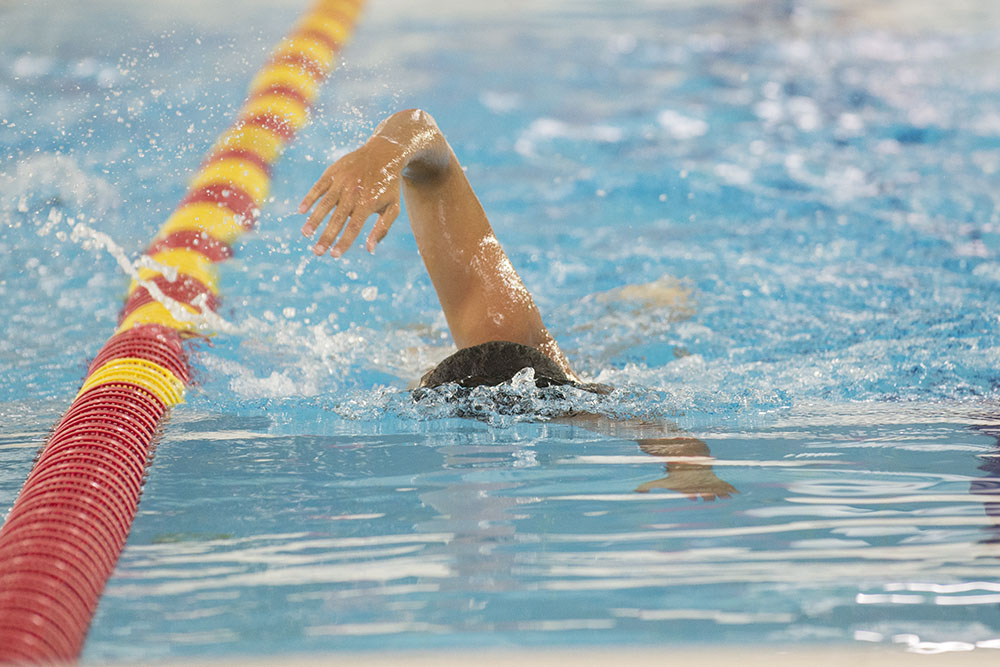 Michael Scott, Regional Manager of Dundler-Mifflin Scranton in NBC’s The Office (U.S. adaptation) once famously quoted Webster’s definition of wedding (read: welding) as “the fusing of two metals with a hot torch.” He went on to say during the toast, “Well, you know something? I think you guys are two medals, gold medals.”

Speaking of gold medals, TritonWear – the world’s most comprehensive swimming analytics platform – considers the fusing of stroke rate and stroke length (or distance per stroke) to be one of the primary focuses of increasing freestyle speed. While all components of swimming (starts, turns, underwaters, and overwater swimming) are important to make up a fast freestyle, the overwater work accounts for a high percentage of swimming (especially in LCM), so starting with stroke rate and DPS is critical.

Stroke Rate is measured in strokes per second (where 1 arm cycle is 2 strokes in freestyle) and is averaged over all but the first stroke of the length. For coaches and swimmers who prefer to use Cycle Time (the inverse of stroke rate), a low cycle team means a high stroke rate.

Stroke Length or Distance Per Stroke (DPS) is measured in meters per stroke [m/stroke] and as the distance swum overwater (from breakout to the end of the pool) divided by the number of strokes.

We know the following equation to be true:

So, you’re probably asking yourself: how can I increase my overwater speed? The short answer is increasing either/both stroke rate and/or DPS. But, – there’s always a but – we also have to ask the following questions:

Here’s what we did: since we wanted to analyze how stroke rate and DPS influence total speed, we did a deep dive (pun intended) into the data and crunched a few numbers. We loaded every annotation TritonWear has done, filtering for freestyle splits, which were made from video-verified analysis of splits swum during practice sessions.

Next, we filtered for: (Gender = Men) and (Gender = Women), analyzing these categories separately and also filtering for the 3 common pool lengths – SCY: 25 yards, SCM: 25 meters, and LCM: 50 meters.

Now that we have our parameters set, we plotted a 3D graph of all data points for each pool length – where the ‘up’ direction is the average speed of the split (for example: 25m/split time (seconds) = SCM split speed in m/s). The result is a plane, with speed increasing as both stroke rate and DPS are increased. 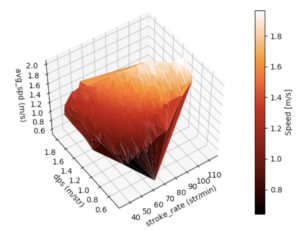 Since it is difficult to view 3D models (above), we dropped down to 2D (below), by using color to differentiate the swimmer’s speeds and grouping speed into 0.1 m/s buckets: 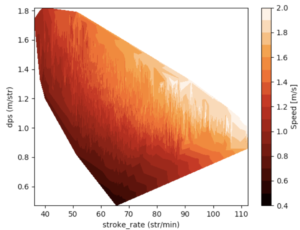 What we see here is that the fastest times (lighter colors) occur at the highest stroke rates and a midline DPS. However, at slower speeds there are clearly contour lines of equal speed.

We recognized that the strong lines we saw in the figure could likely be modeled closely with a simple linear equation to relate DPS and stroke rate to speed. Using this equation, we created contour lines of speed that show which combinations of stroke rate and average DPS provide a given speed. 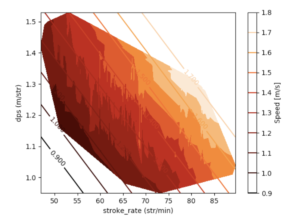 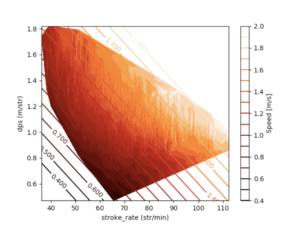 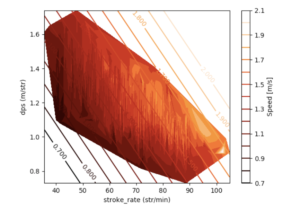 What these graphs (above) are showing us is the shorter the pool (25 SCY and 25 SCM), the more swimmers have favored shorter DPS and faster stroke rates. To put this practically, think: 100 SCY freestyle vs. 100 LCM freestyle. In the short course pool, you’re more likely to have an increased stroke rate as the presence of turns (and underwaters) decreases the fatigue in your arms and allows for a higher, maintained stroke rate. 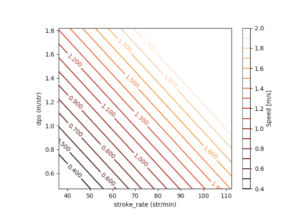 To get faster, a swimmer needs to move from one rung of speed to the next, which in the 3D plot above is similar to climbing a mountain. Swimmers can move up the mountain (increase speed) by skirting around in either the stroke rate or the DPS direction, or can move directly up the mountain.

If you’re thinking to yourself, “Yeah, yeah. Charts. Data points. Math. My brain hurts,” then check out the following example.

In summary, increasing stroke rate in 25m pools yields a better result than increasing DPS. However, you are still skirting around the mountain rather than climbing straight up.

So, what is the optimal ratio? No matter where you start on the mountain, the most direct way to climb is: for every 5 strokes/minute added, DPS should increase by about 0.1 m/stroke.

We see similar effects for the women. 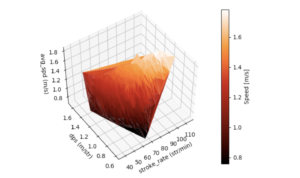 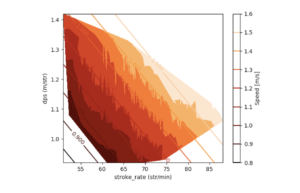 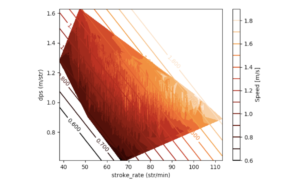 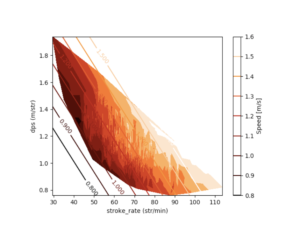 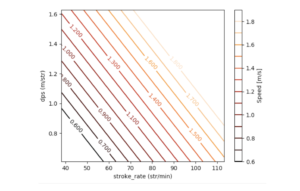 It also matters where you start. For example, if a swimmer is already at a 100 stroke rate with a very low DPS, there is room for improvement in DPS but it may be difficult to increase stroke rate much higher. The swimmer’s height is a factor here as well.

Given the clustering of faster speeds with lower DPS and higher stroke rates, there is a preference for increasing stroke rate rather than DPS. This can partly be explained by the higher variability available for stroke rates: it’s easier to change stroke rates than DPS. This creates the effort vs. efficiency debate. Effort (stroke rate) is more easily manipulated than DPS (efficiency) since DPS is technique-related and generally improves at a slower rate as a swimmer reduces their drag in the water.

Learn more about how you can improve different areas of your swim such as stroke technique, turns, and more, in this comprehensive guide on How to Swim Faster.