Everything you need to know about energy zones in swimming. What are they, how can you use them, and how can AI help automate them? No test required!

What happens in the athletes’ bodies as they train?

As athletes train different energy systems are engaged depending on the intensity and duration of the exercise.

The phosphagen system, also known as the ATP-PC system, provides energy for short, explosive movements. This system is used during activities such as sprinting.  It is the sole source of muscle energy and only lasts anywhere from 5 seconds to about 10-15 seconds. This translates to about 15 meters of 100% max effort for most swimmers.

After 10-15 seconds of the phosphagen system being used up, the body resorts to glycogen. The glycolytic system provides energy for high-intensity activities that last up to two minutes. The glycolytic system is the predominant system utilized anywhere from 15 seconds to 2 minutes of physical output of max effort/speed, resulting in lactate production.

The oxidative system is the most important energy system for long-duration activities. This system relies on the body’s ability to create energy through the use of oxygen.

Understanding how these systems work can help guide you on how to optimize your athletes' performance. Now that we explored the basics of energy systems let’s take a closer look at how these systems are used during swimming.

How can coaches use energy zones to improve swimming performance?

Different energy systems come into play during different swimming intensities or “zones.” By understanding these zones, coaches can design workouts that target specific energy systems to help improve athlete performance. There are four energy systems in swimming: the Anaerobic threshold (AT), the Lactate threshold (LT), the Aerobic endurance (AE), and the Maximal aerobic speed (MAS).

Lactate threshold (LT) is the point during exercise where lactic acid accumulates in the blood at a faster rate than it can be removed. This results in an increase in blood lactate concentration and is associated with an increase in perceived effort (RPE/ workout rating).

Aerobic endurance is the ability to maintain steady-paced movement for an extended period of time. It is the cornerstone of most sports performances and is essential for health and well-being. Many factors contribute to AE, including genetics, age, gender, training status, and diet. An increased aerobic capacity means an increase in the maximal amount of oxygen the body can utilize during exercise.

There are several ways to improve Aerobic Endurance, including interval training, endurance training, and circuit training. Interval training, as mentioned above, involves alternating periods of high-intensity exercise with periods of low-intensity exercise or rest. While endurance training involves performing exercises at a moderate-to-high intensity for an extended period of time. Finally, circuit training is a type of training that combines both interval and endurance training. It involves performing a series of exercises at a high intensity for a set period of time, followed by rest. There are many benefits to AE, including improved cardiovascular health, increased muscular endurance, improved mental health, and increased fat burning.

Maximal aerobic speed (MAS) is the lowest swimming speed at which maximum oxygen uptake (V02 max) occurs and is typically referred to as the velocity at V02 max (vV02 max). MAS was developed to increase the specificity of training and enable coaches to monitor training loads more accurately. However, MAS is not the only factor determining an athlete's performance. While it is a useful tool for coaches and swimmers to monitor and target training, it is not the end-all of swimming performance. There are other variables that play a role in swimming speed and success. For instance, drag is a major factor that determines how fast a swimmer can go. Swimmers with higher drag will have to work harder to swim at the same speed as swimmers with lower drag.

There is no single preferred, and unified zoning system coaches use worldwide. It differs vastly between coaches and organizations. However, almost everyone is familiar with some of the world's most renowned methodologies of zoning out there, including British Swimming, Australia Swimming, USA Swimming, University of Michigan Jon Urbancheck’s codification of zones etc. One common denominator between these methodologies is lactate testing and heart rate.

The Role of Lactate Testing

Lactate testing is an essential tool for coaches. It helps you gauge your athletes' fitness level and see how well your swim training works. It can also be used to monitor progress over time and map out training zones.

In detail, lactate testing helps you:

Find the right swimming intensity for your athletes

Monitor their progress over time

Lactate testing is still the golden standard for determining Lactate Threshold (LT),  and Lactate Turning Point (LTP) / Maximal Lactate Steady State (MLSS). The problem is that it is not accessible to all swimmers and coaches, and even if it is, it's quite invasive and costly.

At TritonWear, we looked into the top zoning systems available and plotted each methodology based on lactate threshold and heart rate.

The most surprising finding was that not only did the zone thresholds not match from one methodology to the next, but lactate and HR zone thresholds often didn’t match within the same methodology. This is why we decided to take the best elements from the existing systems and science to create a new universal zoning system based on Critical Swim Speed. 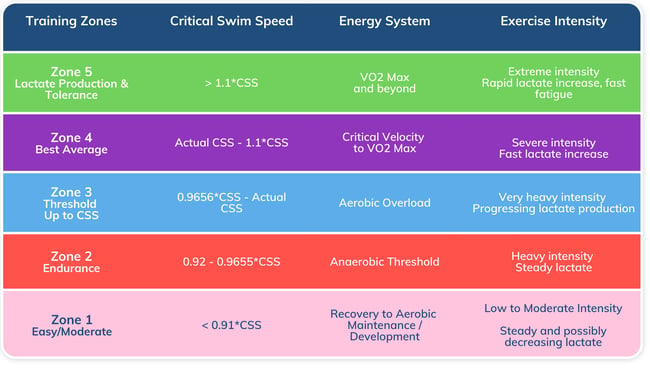 A new era of training zones for athletes and coaches is emerging, one that is more adaptive and individualized than ever before. Automated Training Zones use AI-driven CSS (Critical Swim Speed). By tracking training zones over time, athlete potential is only beginning to be realized, and as technology continues to evolve, so will the capabilities of Automated Training Zones. In the future, we can expect energy system feedback zones to become even more adaptive, delivering an ever-more realistic and effective training experience.