Teenagers & Freestyle DPS — What's Height Got To Do With It?

How does age impact when and how a swimmer ramps up their stroke rate, as opposed to increasing their DPS, when trying to improve freestyle swimming speed?

Did you know that, for younger swimmers (roughly 10–20 for females and 10–22 for males), the main factor that improves freestyle swimming speed is increased Distance Per Stroke (DPS)?

What is more, the fact that swimmers are growing taller during these years is not the only reason that they are improving their freestyle DPS and speed…

Previously in the Analysis series:

To begin, let’s go back in time to when TritonWear asked the question: “What is the relationship between stroke rate and distance per stroke in freestyle swimming speed?”

In this earlier segment, we learned about Dunder Mifflin Paper Company manager Michael Scott’s views on the bonds of matrimony (NBC’s The Office), and we also learned that swimmers generally increase their stroke rate more than their DPS in order to swim freestyle faster (particularly in short course pools where turns and underwaters help reduce arm fatigue).

As a refresher, here is how TritonWear measures stroke rate and distance per stroke (DPS):

In today’s segment, TritonWear asks: Is the observation that swimmers tend to increase stroke rate more than DPS to swim freestyle faster visible across age groups?

Presently in the TritonWear Analysis series:

Let’s kick off by borrowing one of Michael Scott’s “special terms” and declaring that our mission to answer the question above is certainly not “insur-mountain-able.”

What we want to know is whether, like senior swimmers, young swimmers also ramp up their stroke rate (as opposed to increasing their DPS) when trying to improve their freestyle swimming speed.

As we will see, the data on young swimmers actually suggests a different conclusion…

What the TritonWear Team Learned:

The TritonWear team turned their attention to freestyle swimming in 25m pools. They reviewed data collected from 946 male swimmers and 1031 female swimmers, whose ages ranged from 10–25 years old.

Interestingly, TritonWear learned that “young swimmers” (approximately 10–20 years for female swimmers, and 10–22 for male swimmers) generally did not increase their stroke rate to swim faster in freestyle. 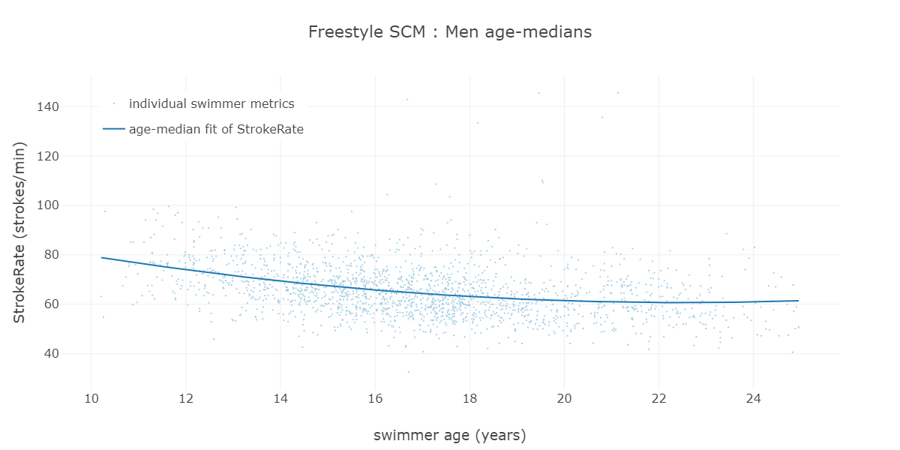 Same graph, but showing fitted trend lines for both women and men: 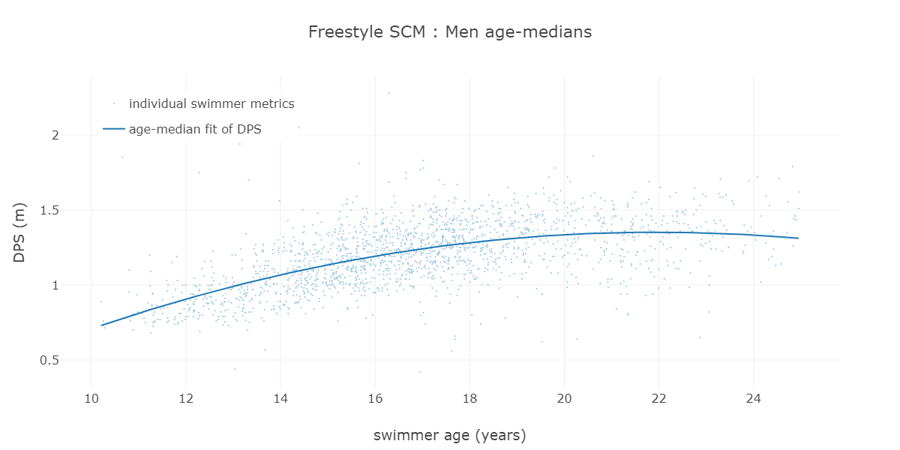 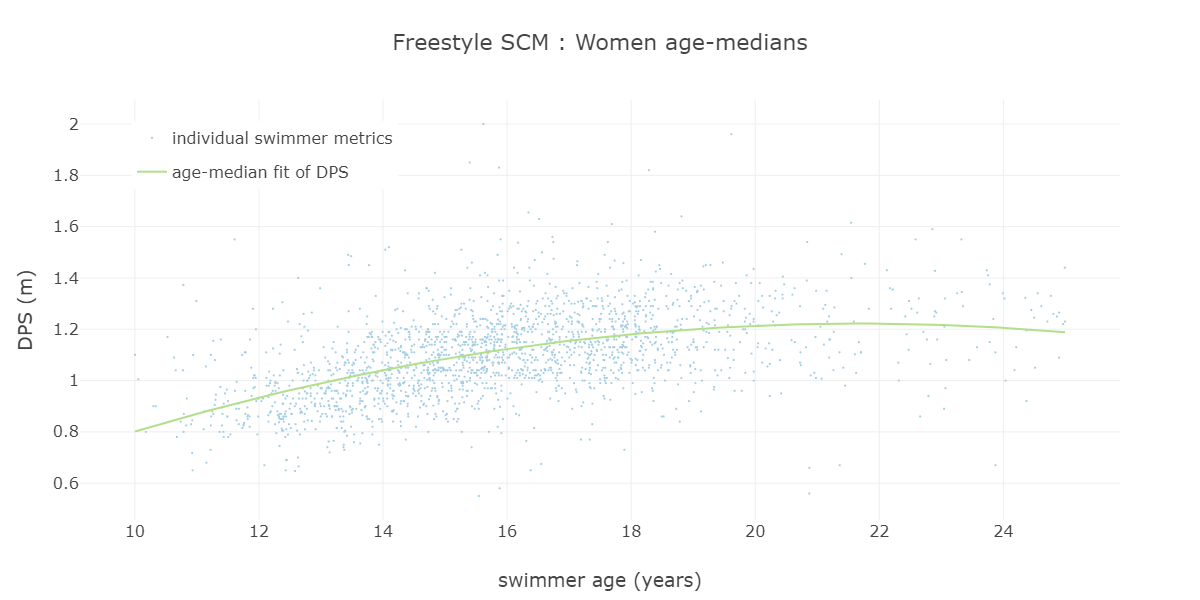 Now, one might wonder whether physical growth is a key factor in this noticeable DPS improvement. After all, young swimmers are not only becoming older and faster—but also taller.

So, TritonWear decided to ask a new question: During their teenage years, are swimmers only getting faster because they are growing and thus able to pull longer strokes with longer arms?

To tackle this new question, TritonWear used the World Health Organization’s median height data (for ages 10–19) to reframe DPS as the percentage of a swimmer’s body height pulled per stroke. That is, if Laura is 5 feet and 2 inches tall, then what percentage of her body height is she pulling with each stroke?

This next graph tracks DPS as a percentage of height, and it shows that physical growth alone is not responsible for improved DPS in young swimmers (ages 10-19) because even when height is factored in, young swimmers continue to increase their stroke length.

The TritonWear team learned that:

Young swimmers tend to decrease their stroke rate as they grow. Meanwhile, these young swimmers benefit from continuing to improve their DPS by enhancing their technique and learning how to hold water more efficiently.

Ultimately, DPS is the main factor that improves freestyle speed among swimmers 10–20 for females and 10–22 for males. It is also useful to pay attention to DPS as a percentage of body height, which should gradually increase (especially among female swimmers).

Once swimmers have grown older (approximately 20+ for women and 22+ for men), increasing DPS continues to be helpful, but they will then rely more on increasing their stroke rate to go faster as well.

Learn more about how you can improve different areas of your swim such as stroke technique, turns, and more, in this comprehensive guide on How to Swim Faster.