TritonWear recently had a conversation with Brent Mitchell, head coach of Metroplex Aquatics, to discuss the impact of the TritonWear technology on his training program in McKinney, Texas.

When asked what he thinks of the systems so far, Brent responded, “It’s almost like having a second coach on deck.”

(Want to learn how you can use swim technology to improve your training? Come chat with us!)

For the past decade, Metroplex Aquatics has consistently qualified swimmers for Olympic Trials and sent dozens of graduates to Division I collegiate programs across the country. Brent currently has three swimmers qualified to compete at the 2016 USA Olympic Trials coming up at the end of June. As part of their preparation, these swimmers are using the TritonWear systems on a regular basis to improve their efficiency in the water.

“We’ve been looking at formulas for having a powerful stroke. There are various ways to get to a time, but you want to be efficient.” Brent explained that he’s been working with his swimmers to understand the importance of stroke efficiency, and the TritonWear systems have made it easier than ever. Swimmers have been tasked with determining what length of stroke creates the most power per stroke, a process that has made them more involved in the technical aspects of their races. This classroom-based approach has extended TritonWear’s application to become “a coaching device outside the pool.” 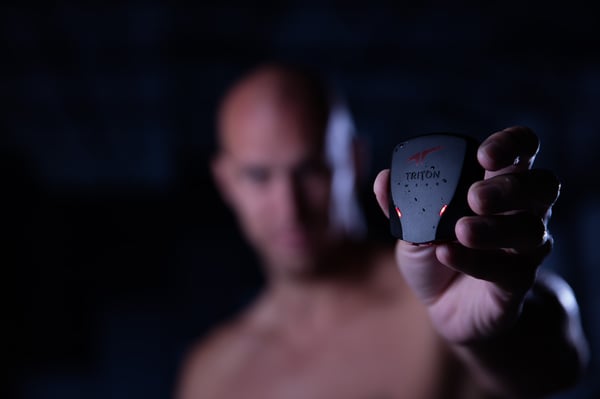 Brent also credits the TritonWear technology with enhancing his overall coaching – using the systems is like having an extra coach on deck who is able to record data for all swimmers simultaneously. With the assistance of TritonWear, he is more confident in his own observations.

“As a coach, I’ve always been able to do things on a feel. But now, I’m able to look at the numbers to back up what I saw.” By examining hard data, Brent can justify the decisions he makes and the strategies he uses.

He points out that using backup data is especially important when working with today’s kids, who always ask: why?

“You need to go in depth into why you’re doing something and convince them that it’s the smart thing to do.” The data collected by TritonWear can be used as evidence to support his conclusions, resulting in a more trusting swimmer – especially when talking about stroke efficiency, which is difficult to measure accurately without technology.

“A coach can always say, ‘you’re spinning.’ But now I’ve got proof that they’re spinning.” This way, swimmers become more understanding of the reasoning behind the decisions he makes.

This tech-savvy generation of swimmers also responds very well to using the technology in the water and examining their data at home. Brent claims, “Its easier to talk to swimmers because they can see all of the variables that I see when they’re swimming.”

When the kids become more involved in the overall process, they ask better questions. They also take more ownership when they can see their efforts translate directly into immediate, fact-based results. “There are easy ways to teach this stuff to kids, and it also builds their confidence to see that when they do it right, it equals out to better times. I think it goes a long way.”

Even when the swimmers aren’t wearing the TritonWear systems – like in warm up at a swim meet – they can easily get into the stroke-efficiency mindset that the technology fosters. Brent has noticed that his swimmers are more cognizant of their own stroke efficiency after using the systems. They become better students of the sport.

TritonWear doesn’t just collect numbers – it fundamentally changes the way swimmers approach training, and the way coaches interact with their athletes. When asked for any final comments, Brent simply said, “I love it.”

The History & Mechanics of Freestyle Swimming

How to Swim Faster

Freestyle is BY FAR the most commonly trained stroke, and the number 1 used in other...