Get the inside scoop on TritonWear's Push Off Strength. Learn how it's measured and what different results indicate for the swimmer's overall performance.

There are many components to perfecting turns: breaths into the wall, turn speed, strong streamline, strong pull outs, and a popping up on breakouts. Rather than asking swimmers to focus on all of these simultaneously, let’s break it down to impact the overall outcome. This week, we are focusing on Push-Off Strength.

This metric is an equally integral and interrelated component of a successful turn. It will measure the obvious problems; turning too close to the wall, or turning too early for a decent push. But it will also measure the less noticeable; head position and angle coming off the wall, and balance.

So what does Push-Off Strength measure, really?

This metric is a little harder to understand, but once it’s clear, it will quickly become a favorite. The simple explanation is that it’s a measure of effective speed at the moment the feet leave the wall. The technical description goes a little deeper: it is a measure of total acceleration, based on multiple data points, summed up as the swimmer pushes off the wall. In summary, it’s related to speed, but influenced by gravity and turn type as well.

Gravity can both positive or negatively impact the result, both offering important insight into perfecting the turn. A swimmer angled heavily downward (head tilted toward the chin) as the push off occurs will return a lower value. In this case, the pushoff strength will seem oddly low compared to time underwater. It may also relate to a slower split time, as the swimmer has to recover the downward angle, rather than swimming straight out from the wall. 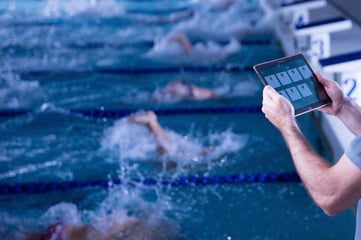 Conversely, a swimmer angled sharply upward (head tilted up), will see a higher value returned for Push-Off Strength. In this case a higher number is not a better number, and will likely correlate with a shorter time underwater, and potentially higher stroke count for the length.

Push-Off Strength is further impacted by the type of turn. An open turn, performed during breast or fly, inherently returns a lower values. This is because the swimmer is at the surface during the turn, therefore descends at the point of push off, to execute the pull out. This is expected, and should not be considered something to correct. A proper flip turn on the other hand, should only angle slightly in either direction when pulling out. If an unexpected number is seen here, it may indicate the swimmer is pitching up or down coming out of their turn, finishing too early (lower number), or finishing too late (higher number).

Finally, streamlines will impact the result as well. Because if a swimmer isn’t streamlined during push off, they won't gain any speed no matter how hard they push. The water will push back against them negating any forward propulsion, and returning a lower Push-Off Strength value. If all of the other metrics seem in line, but Push Off Strength is still low, check how they streamline.

Right, but what is a high and low number, realistically?

The result returned is a relative number, starting at zero and climbing as swimmer gets stronger. Elite swimmers, performing a 50m race, typically record between 29-31 for females, and 30-33 for males.

As with all metrics, each swimmer’s individual needs will impact their results. Having said that, we have assembled some best practices for perfecting turns using Push-Off Strength:

The moment a swimmer’s feet leaves the wall is the moment they will have the most speed of any point. The rest of the length is simply about keeping as much of that speed as possible. If speed is not generated at the push off, it’s won’t be generated through any amount of stroking. Therefore, there is a definite value in perfecting Push-Off Strength, and coming off the wall with the most strength. Use Push-Off Strength to really dig into the turn exit, and capitalize on this velocity.

Contact TritonWear today to learn more about this and our many other metrics, and to see how we can help your team reach new heights.